All Ball photos from Doris~
She took many lovely photos, and if you click them it'll take you to her album which you should check out!

Had a great time at Maker Faire then zoomed home, where both D & twjudy were early D:

So I zoomed mah girly makeup & changed my underclothes to the right shoes, socks, & leggings. Then AJ showed up and TO THE BALL~! 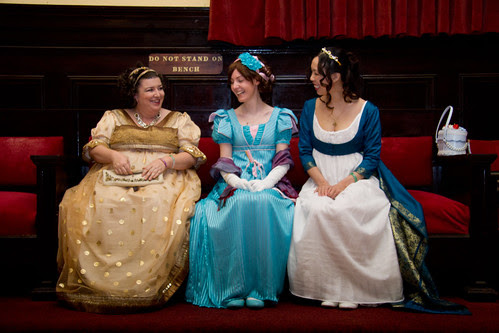 Edited more pics last night!
And I'm still more ahead than this, but yay.

Read more for pics, notes, and a facepalm realization 8D

Little bit of post-crossposting to kick off my blog, so things that are future tense actually already happened!

May 18th there's a Regency Ball celebrating the 200th anniversary of Pride & Prejudice to which I'm going. Nervous about the dancing bit, but lots of lovely ladies in Regency wear?

Naturally I wanted to make something new, so I bought this saree but when it came it was quite a bit lighter and also the stripes weren't variegated. I had planned on pairing it with a blue, maybe like a dark royal blue or something a bit peacocky. Anyway, with the colour it actually was I couldn't think of a good blue to pair with it. I thought a pale yellow or a pale pink would do well with it, but since I really don't care for yellow, pink it was.

So at my local Super Joann there's this muslin that's suuper fine and see through and floaty and makes me think of Regency right away.

I didn't go to the Super Joann. I went to another because it was on my way somewhere on a Friday night and I really wanted to get started that weekend. I bought the finest muslin I could find, thinking I had misremembered the fabric, and some light pink RIT dye. Several weeks later while at my Super Joann I found that I hadn't misremembered, the other Joann just didn't have it and boo I was already way too far along to start over. Boo impatience.

Anyway, I wanted a suuuuper pale pink, so I did like... 1/8th of the recommended amount of dye. It turned out pretty bright 8D I don't even know.

Right so! My inspiration dress:

Now forget all the details.

'Cause that's what I did pretty much.

In 2012 I went to my first Costume College, it was fantastic!

After I was browsing about at peoples' blogs and generally being inspired when I thought, I should do a sewing blog!
Not so much because I have so much insight, I don't, but I believe it might motivate me.

So, I already have a livejournal, here, which is a catch all. If you're also interested in random fandom thoughts and travel musings you can see it all there. For just sewing, I'll be cross posting here :D

I generally go by Mi, and I've been sewing since 2001. I started with anime cosplay, and have gradually taught myself pretty much everything I know. I have a huge sci-fi partiality (hence my blog name!), so most of what I sew has a bit of a geek bent. I still costume loads, but make random sewy crafts as well. In 2001 I broke into historical costuming, and here I am!